An invitation to explore the beneficence of limits 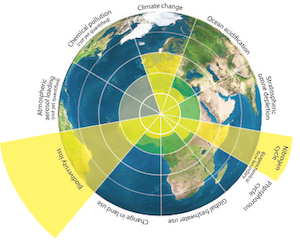 Tell a two year old not to touch something (especially a yummy looking cake); to share their favourite toy; or it’s time for bed, and you’ll likely get an uncensored reaction, possibly a stamping of the feet, a defiant, screaming NO. It’s at this young age we have become self aware and must start to learn about limits. From the perspective of a two year old, however, limits are bad news!

Perhaps that is why the original reaction to the prescient work Limits to Growth* lead by Donella and Dennis Meadows in 1972 created such a furor of opposition. Was it “the child within” resisting what it perceived as an unpleasant and undesirable future and indicating that humanity as a whole hadn’t yet grown up?

The process of maturation is learning to live with limits and that they are not necessarily “bad”. In fact we know from experience that some form of constraint (an obstacle, a problem) are essential pre-requisites for creative-innovative responses. How many of you are of the type that needs a deadline to do your best work and delivers best when under pressure? Historians are showing that most great evolutionary-scale leaps occurred in response to an external force such as climate change that marked the end of one known and the beginning of an unknown. 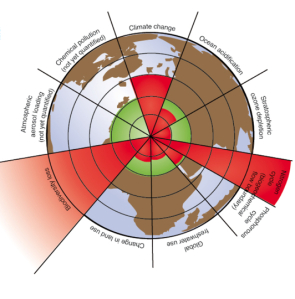 As far as the ruling establishment on this planet is concerned, the term “limits” is still off limits. The term sustainability was adopted with varying levels of enthusiasm because its ambiguity creates a space for us to retain our cherished illusion – that we can grow materially for ever (i.e. produce, sell and buy more stuff or take more trips on a finite planet) without having first proven our ability to decouple use of material resources with such growth.

Another richer word for limit is boundary. It too indicates a confinement or restriction to operating within a fixed space or within a concept but “boundary” also marks a line between two entities or states and suggest that there is a point at which one can pass from one state to another.  It suggest that beyond the boundary lies another, different set of possibilities that may or may not be safe or desirable.

That’s why I think the work of Johan Rockstrom at the Stockhom Resilience Centre and UK-based Kate Raworth are so helpful. They have each in their field (Rockstrom -environment and Raworth -economics and social well being) have re-introduced the the notion of limits as creating a “safe operating space” in which to explore a better way to be.

Rockstrom and his colleagues identified 9 measurable planetary boundaries within which humanity and other life forms can potential survive and thrive. The attractive notion of this approach is that the earth’s natural abundance, combined with humanity’s collective intelligence and ingenuity, create huge possibilities for flourishing.

It turns out that the only real limit we must overcome is the self-imposed limit to our imagination.

Fortunately we don’t behave like two year olds forever – well most of us don’t. We grow up.

An Invitation from Johan Rockstrom and Me!
The core challenge facing the tourism community is to accept that we can’t grow the volume of travel (trips, literal and conceptual footprints) at 3-4% per year for ever unless we can prove we have decoupled that growth from resource use. Unfortunately, our track record for the latter is abysmal as identified by many scholars including Stefan Gosling and the Cambridge Institute for Sustainability Leadership. Yet, show me a destination strategy that doesn’t have as its mission and focus to grow tourism by some percentage compounded year on year?

I do acknowledge that there remain places where growth is needed  but by adopting a very different understanding of growth (net yield and quality – NOT quantity at any cost), they can avoid the problems experienced as “success” in many mature but also declining destinations – see Guardian article here.

Because I believe we have to dig deep below the superficial notions of sustainability (which is at best making a situation “less unsustainable”), I am taking advantage of an amazing opportunity – to learn from the great JR himself! The Sustainable Development Solutions Network (a Global Initiative for the United Nations) SDSN.EDU,  is offering several high level  courses for FREE, including one with Johan Rockstrom – Planetary Boundaries and Human Opportunities that starts on November 17th. I invite any readers of this blog or your colleagues to sign up and join me.

Perhaps together we can break through the limits of our imagination and explore ways of co-creating a better form of tourism that is better for all!

* there’s an animated slide deck describing the work and its relevance 42 years on here – you can turn the volume off and still get the message!