Deja Vue or Clairvoyance – You Be the Judge

It was November 2001 at WTM and we were reeling from the impact of 9/11 and the aftermath of the dotcom crash. Thousands of IT specialists were out of work; CRM was the latest “new thing” as were XML, “web services” and “interoperability.” I’d just had to let go my involvement in a software company and formed DestiCorp Consulting and did this interview with a former colleague.

How might this image be a metaphor for international tourism?

Fast forward 11 years and I have just spent the past 8 days producing three webinar/videos on Conscious Travel which I will upload this week. To be honest I am not quite sure how to react to this DestiCorp interview – the content is remarkably consistent; the passion hasn’t waned but the wrinkles have certainly deepened! Eleven years have passed and I still feel compelled to be putting out the same message. It seems like yesterday.  Where did the past eleven years go? How much has changed or not changed? Will we get to the year 2023 just as quickly and how will we have handled the extra 600 million international trips that are forecast to take place?

They say that timing is everything. My timing wasn’t right in 2001. The tourism industry wasn’t ready then to hear anyone suggest that it should take time out to re-think. Many operators were holding on to the bucking bronco of demand after the attack on the World Trade Centre. What wasn’t clear either was just how quickly (relatively speaking) the economy would bounce back – especially in the US and UK where hedge funds were just beginning to scout for real estate in Mayfair; house prices were still to soar and ordinary Britons were to start taking advantage of Easyjet and Ryanair’s crazily low fares to Europe and speculate in real estate. The next six years (2001-2007) were about to see a few people get very rich and cause an even larger number of people to think were because of the extra zeros on their net worth statements. We lurched from one bust in 2001 (when the dot in dotcom punctured the bubble) to another one in 2007 when the financial house of cards came down – only this time its impact cut deeper and is lasting longer.

So is the timing right now?  Will the message be better received now than then? The simple answer is yes – I do sense a sea change. When a former senior executive of the UNWTO now describes himself as a Chief Disruption Architect, then something is shifting. When Michael Porter declares it’s time to “re-think capitalism” and companies like KPMG state that the current approach to business is non-sustainable and Deloitte support Elkington’s Zero Impact concept, then people like me can take heart.   It’s become disturbingly fashionable now to talk about sustainability, higher purpose, doing good, going green.  The good news is that  the number of initiatives (for want of a better word) in the sustainable, eco, ethical, fair trade, geo, local, responsible and good tourism arena is already significant and gaining momentum every day  – albeit in a very fragmented way. The challenge now is unifying the multiplicity of weak signals and diluting the semantic confusion as the sustainable Tower of Babel gets larger – but that’s another topic. 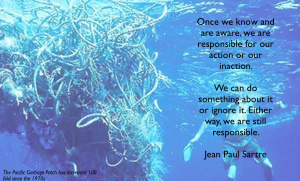 The more truthful answer is “I simply don’t care whether it’s right timing or not.” Conveying this message is simply my destiny. I can’t escape it. I feel as if I am an instrument being played. The words of Jean Paul Sartre keep echoing in my head.  Thanks to my role in tourism – that of quasi futurist and  sense maker I have to expose myself to information many others would prefer to ignore. I now simply know too much to mute or modify the message.

My circumstances over the past 18 months – when I have been travelling and staying with a host of friends and supporters – have provided an opportunity to test out my ideas. I am even more convinced that change is necessary and  encouraged to see it happening spontaneously. I’m also more convinced that the only effective  approach is to work not with the traditional sources of power and influence (the centralized associations and agencies) but with groups of hosts in small communities. They are the ones that must develop their creativity, ingenuity, self-confidence and resilience if they are to survive let alone thrive over the years ahead. This is how change occurs in the natural world and nature has had over 13.5 years of practice! We are trained to think that the itelligence of a cell is centred in its nucleus – the command centre but current biology has learned that the real smarts lie in the cell membrane where the edges of the cell interact with the environment. This applies to tourism – tt’s the hosts and their employees who know what’s really going on and have the most leverage to effect change.

As I have been saying for over 15 years, the role of Destination Marketing Organizations going forward should be to do less and enable more. They need to use the resources they have been allocated from the public purse to create the conditions whereby innovation and creativity can emerge and erupt naturally – just the way that it occurs in the natural world. Two of those conditions are trust and confidence – trusting in their capacity to adapt and providing the support and recognition. Conscious Travel is designed to provide a support structure for collaborative learning, experimentation and adaptation in the membrane.

Next week I’ll be launching three beta videos (beta is a fancy way to say they are home made and draft) that describe what we mean by conscious travel. The interesting thing is that this 11 year old interview is as good a sneak preview as any!