10 Reasons Why Airbnb is an awesome Conscious Travel Enterprise

Some hoteliers hate them, many consumers and cash strapped property owners love them – and so do I. There’s no doubt that Airbnb is proving to be a highly creative and gutsy source of disruptive innovation and,  what’s really exciting,  is that it’s not the technology but the daring application of technology that’s the cause.

Back in 2008, three young men found themselves broke but living in a city temporarily full to overflowing with visitors – mostly delegates at the Democratic National Convention. They turned a problem into an opportunity by realising that their challenge was likely being faced by countless others and by asking the right question: “what if you could book space in anyone’s home the way you could book a hotel?” Four years later, they have over 250,000 homes on their site across 30,000 cities and 190 countries; have done over $4.5 million room nights in business and the company is valued in excess of US$1 billion and climbing.

At first only the technology community took notice even though Airbnb isn’t really a technology company at all. But it did make use of peer to peer technologies that underpinned the success of companies like E-bay, Craigslist, e-lance etc. According to Triple Pundit, its success is due to the fact that it overcame the two main obstacles associated with “peer to peer” marketplaces – fear and inventory.

Now here are 10 reasons why I consider Airbnb not just the poster child of the phenomenon known as “collaborative consumption” but for Conscious Travel as a whole.

1.CRAZINESS – they faced the fear and did it anyway; always finding practical and often contrarian solutions to the problems that many investors turned away from – to their cost. 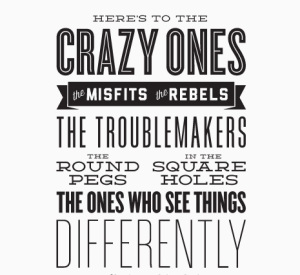 They didn’t think it crazy or stupid to do the unthinkable or seriously consider what others thought impossible or even stupid. They were NOT engineers looking for a market to showcase their clever algorithms but ordinary guys looking to pay their rent and solve a problem in a way that could benefit others.

They used both sides of their brain (early on potential investors couldn’t understand why designers out numbered engineers) and were often contrarian in their views taking a common sense approach to seemingly intractable problems.

They are obsessive about customer satisfaction, ease of use and creating something of beauty – just as well because the majority of travel is booked by women and if you make the tool nice to look at as well as easy to use you’ll get and keep our attention. (I still avoid Craigslist simply because it’s so geekily ugly). They constitute what Steve Jobs called “The Crazy Ones” and it’s these kinds of people who will be the first to become conscious hosts.

2. PEOPLE:  Airbnb acknowledges that hospitality is first and foremost about people meeting people and when people are staying in other people’s home trust and confidence are needed to overcome fear. Sure there’s a transaction and all three parties (host, guest & Airbnb) benefit financially from that but their motivation was enabling both parties to do something they hadn’t thought was possible before. For the guest it meant not only accessing an affordable bed and place to stay using searches of homeowner/renters’ room inventory in real time but the chance to experience a destination in a much more meaningful, personal, human way.

”When someone steps foot in your door, or you step foot in someone else’s door, something powerful is happening – we are breaking down cultural barriers and connecting people in a real way.” Christopher Lukesic, Airbnb employee

When you listen to any of the AirBnB principals speak, the word that you’ll hear over and over again is “community.” Here’s the presentation Disruptions in Brand Building that Christopher Lukesic made to Sustainable Brands last year that highlights the people  and place focus, core principals of Conscious Travel. And if you want further proof that transactions will only occur when trust between people has been established then look at their safety video.

3. PURPOSE: AirBnB’s primary purpose as stated on their web site:

The Golden rules listed on their website for travelers and hosts alike all encompass values identified as core to Conscious Travel – respect, reciprocity, reliability, commitment, and transparency. 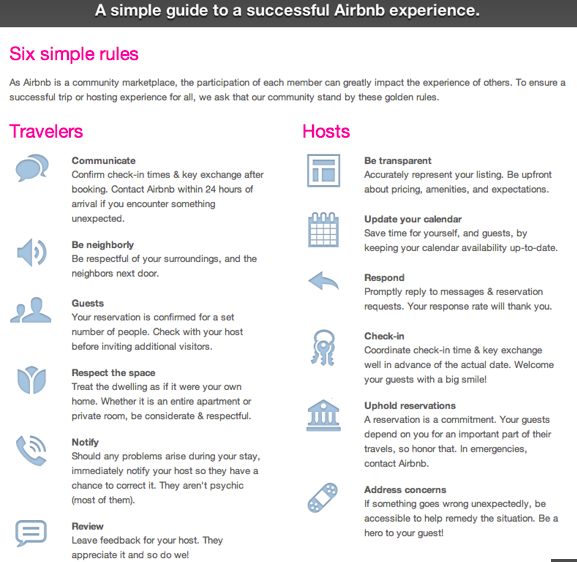 4. PLENTY: a founding principal of Airbnb and Conscious Travel is that everyone wins – guests get personable hospitality at an affordable price; hosts get extra income; communities get more spending in less congested commercial areas and more of the money stays in the community.

Airbnb provides an income to hosts from an asset they would otherwise not be able to access. Note 90% of hosts rent out space in their own home and 50% depend on the income to pay rent, mortgages or other household expenses like medical bills etc. In challenging financial times, this additional income has been a lifesaver for many and, furthermore as over 60% of properties are located outside the downtown cores where hotels are generally located, the tourism benefits are dispersed more widely.

Airbnb provides a large and very diverse range of properties from sofa beds and single rooms at less than $30 a night through to shared mansions and castles and very quirky spaces (tree houses, airstream caravans). It thereby meets a social need for affordable accommodation that benefits host as well as guest.

Airbnb recently commissioned a study to measure its impact in the San Francisco area. A more complete description of its findings is presented in an article in Forbes magazine here and I recommend a read. Some headlines from the Forbes article are presented below: 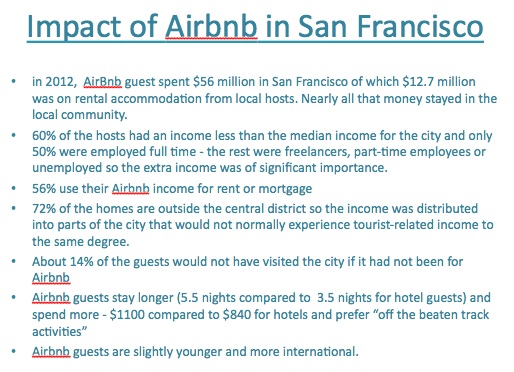 5. PLACE: While Airbnb doesn’t promote destinations as such, its appreciation of community means that it does try to ensure guests can really get to experience the place like a local and not miss experiencing local attractions, amenities and food etc.

Research with their own guests showed the principals at Airbnb that these travellers were going to exceptional lengths to research locations and neighborhoods before booking, and by giving those potential customers more information the company would be solving a piece of the puzzle and potentially extending stays.

As recently as 10 days ago, the  company launched “Airbnb Neighborhoods,” a feature designed to  help users decide which neighborhoods within a city they would enjoy most. For example, you can filter by museums, restaurants, and transit options when exploring a city on Airbnb. This feature will initially be rolled out in 300 neighbourhoods in seven cities around the world.

The company is also launching a “Local Lounges” product, which will include local partnerships with coffee shops in city neighborhoods as places for travelers to find free wifi, travel guidebooks, and a friendly face. San Franciscois the test case for this service.

The following 14 minute video presents the launch of these two features.

So with this foray into the travel guide business, expect further disruption – especially if the hosts are solicited to curate and adjudicate local content and more deals are done with local providers of “local” services.

6. PULL: Airbnb makes really effective use of social media to harness the power of the social graph as a way of  mitigating the risks that both guests and hosts associate with renting a part of their homes to strangers.  When the potential guest does a search, the system identifies properties where there is a connection to the person doing the search ( a Facebook friend might “know”  – as in be connected to the owner)

Another attractive feature is the Wishlist which enables browsers to create a short list while browsing to create a themed list for sharing.

Airbnb understand that unless they are active n the mobile space they’ll lose a lot of business. Some 26% of all bookings are now made on mobile devices and they are completed more quickly as illustrated in the following info graphic. The large, high definition professional images also present very well on the newer high resolution smart phones and tablets making the app an attractive to browse through and send time on, 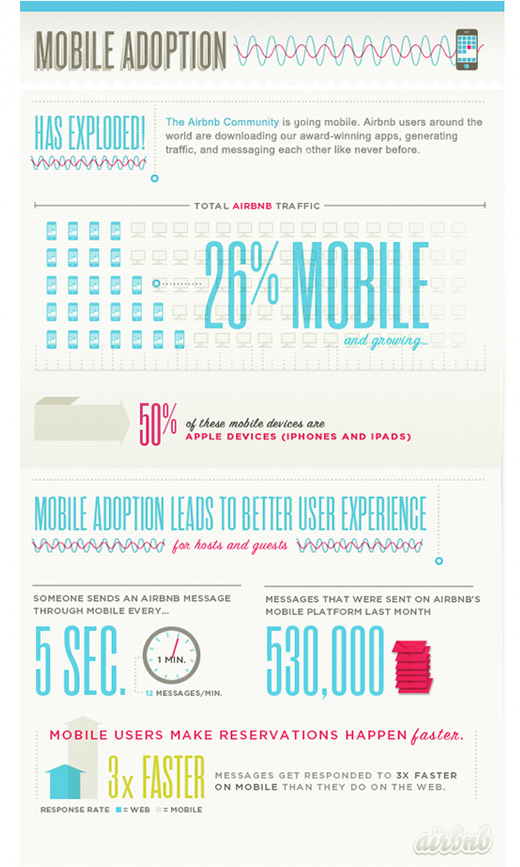 7. PROTECTION: While Airbnb does not overtly claim to be particularly “green” or sustainable in practice – it can be argued that, by making better more efficient use of existing housing assets, it places less demand on resources. The potential exists through the neighbourhood program to inform guests of ways in which they can support local businesses,  assist local sustainable and rejuvenation efforts, make better use of alternative forms of transport and support other tourism providers that have committed to environmental protection and cultural rejuvenation.

8. PACE: Airbnb guests do tend to stay longer than hotel guests and, because of the dispersed location of many Airbnb properties, they are likely exposed to less well known parts of a city that could cause them to slow down and explore. Admittedly, there is more potential for the realisation of this Conscious Travel principal, than practice right now.

9. EXPERIENCE: the entire Airbnb experience for both guests and hosts is designed to be aesthetically attractive (nothing could look less like Craigslist), simple but functional and reassuring. A striking feature of the service is the use of high quality, professional images that have been know to help significantly with booking rates. Airbnb understand that travel is an emotional purchase based on dreams and fantasies and “eye candy” sells.

10. MINDSET: I’ve saved one the best reasons for claiming that AirBnb is a Conscious Travel Enterprise till last and that’s their mindset and approach to business which are so refreshing. The founders claim that travel is the social network in motion; they subscribe to the values underpinning what as been described as the sharing, collaborative economy; they refuse to be drawn into zero-sum games and do not see themselves as stealing from the hotel sector but as meeting a need of people that no one else has addressed.  CEO, Rob Chesky spoke eloquently and passionately at the end of his presentation to Phocuswright (see here) that travel is still undervalued and implied that there were enormous opportunities in overcoming the problem called “youth unemployment.” If this mindset does hold firm then I hope we’ll lots of creative and collaborative partnerships going forward.

In fact when it comes to disruption and the democratisation of travel, I think this company has barely scratched the surface. Imagine links to other P2P providers such as Tripbod and Hostme (local tourist guides); or helping to find an activity companion via a servce such as Uniiverse: fancy a sail this afternoon with a local sailing enthusiast; need to rent some snorkeling equipment that’s sitting in someone’s closet unused;  or a want a lesson in preparing a local delicacy while staying at your Airbnb?

Admittedly, my somewhat rosey and self serving post doesn’t address all challenges (eg the health and safety issue, taxation issues etc.) Nor does it mean to imply that the majority of hosts can be described as “conscious hosts” or that the majority of guests live up to the desireable practices of a conscious traveller, but here’s a company seeing & doing tourism differently (as a network not a fragemented industry) while meeting a market opportunity without the need to pour more concrete or erect more buildings that will never be fully used.

Amsterdam takes a positive approach to the Sharinf Economy & AirBnB