Tourism: a Time of Leadership or a Time For Leadership? 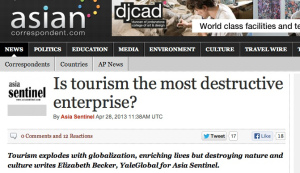 For as long as I have been working in tourism, I have heard its “leaders” (presumed by society to be the heads of global agencies or multinationals) complain of a lack of media attention and the failure of governments to take it seriously or to give its tourism ministers political clout.

Based on the spate of headlines since mid April, it looks as if that situation is changing – but whether that is for the better or for the worse depends very much on your point of view.

The first event to grab the headlines was WTTC’s 13th Annual Global Summit under an ironic theme “A Time For Leadership”. Ironic because that title implies leadership has been absent the past.  Ironic because WTTC’s claim to be “The Authority of World Travel and Tourism” suggests that it’s the group that must take responsibility for any previous leadership vacuums.

The BBC’s 6 minute, Fastrack program sensed as much and viewing it is worth the investment of your time. I can’t embed the video but click on this link and the image to view.

The tone of Rajan Datar’s report cast doubt on the ambitious claims made by the leaders at the event that:

a.) “travel and tourism can be a catalyst for change – alleviating global poverty, inequality and even environmental damage” and

b.) that tourism’s continued “growth”  and sustainability are not mutually exclusive. 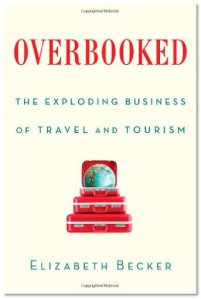 About five days later Tourism made headlines again with Simon and Schuster’s  release of Elisabeth Becker’s opus, Overbooked in which this eminent journalist and editor “discovers” that tourism isn’t quite the frivolous, fun preoccupation that only gets mention in the travel pages of most media but, instead,  a giant business sector, an industrial phenomenon and now the world’s largest employer.

While nowhere near as hard hitting as Leon Hickmans’s earlier analysis outlined in the The Last Call published in 2007, Ms. Becker’s account doesn’t shirk from identifying the environmental and socially destructive impacts of this industrial contributor to globalization. She makes the following conclusion which, as you can imagine, gave me some comfort and encouragement:

For the emerging middle class around the world, travel is a right of passage. Travel is the reward for hard work and proof that one has arrived. Yet with every right comes responsibility, and protecting the world’s beauties would seem obvious by demanding that the industry respect local culture, heritage and the environment.

Sadly, Ms. Becker’s  account of tourism’s dark side isn’t news to any of us – the members of the Facebook Group Irresponsible Tourism  and RTNetworking are doing a great job of highlighting our internal challenges that cannot be ignored. What I did find interesting was her perplexity around the fact that tourism as an industry is subject to so little scrutiny. She could see that governments like the revenue, the investment and support for infrastructure and its provision of jobs etc. but there seems either some collective shame associated with this source of benefit or some form of innate snobbery – as if the glitteratti see no need to know what goes on below decks or behind the swing doors to the kitchen.

Having read the book, I don’t feel Ms Becker ever gets to the bottom of that paradox. Is tourism the prodigal son that leaves home to make some remittance money for a family that would prefer not to delve into how that wealth was derived as they simply don’t want to stop the flow?

There’s no doubt now that tourism is associated with huge wealth creation – you don’t sneeze at $6.3 trillion – but,  as volume demand continues on a finite planet, and evidence mounts that this wealth doesn’t evenly benefit the 10% of the world’s labour force engaged in it, you’ll see more headlines like “Is Tourism the Most Destructive Enterprise?” or “Tourists Today: Trample Distrust and Destroy.”

So – Is it a Time of Leadership or a Time For Leadership?

Answering this question addresses Becker’s initial query – why doesn’t tourism get the same attention as other sectors?

I believe tourism will get the attention it deserves when it wakes up, grows up and steps up. Right now its dominant form – the “mass industrial model” is operating like an adolescent resisting any need to take responsibility for the whole. There is a paucity of Leadership and vision from the top – a situation not peculiar to tourism. All you seem to hear is a request for more favours, more concessions while at the same time expounding how well tourism is bouncing back and – now – potentially capable of saving the global economy no less!

It is, on the other hand, a time FOR leadership – a time for hosts and host communities to ensure they attract the kind of tourism they want and that generates net benefit.  It will be a different kind of leadership – emerging from ordinary citizens, community by community as is being shown by all those individuals pushing the responsible, sustainable, fair agenda forward.

I most certainly am not anti tourism – conducted properly it can create a far greater value than has been realized to date. In fact, as has been shown throughout this web site; the issue is one of value and “wellth” generation. But I am disappointed with the self serving complacency, denial, arrogance and self-satisfaction of those who, despite all the resources at their disposal, continue to repeat hollow sounding platitudes and ignore the truth.

Every other aspect of human endeavour – healthcare, education, retailing, food and energy production, capitalism, economics and politics is going through a radical re-think. It’s time tourism recognized the time for partying is over and it must come to the family table with constructive ideas as to how to face the issues affecting the community as a whole. I think that might have been what Taleb Rifai, Secretary General of the UNWTO was alluding to when he said in the BBC clip “ the more they (countries) become conscious of their responsibility, the more they can perfect their investment in what is right and good”.

The real task then is to shift consciousness as in awareness, purpose and priorities. Without such a shift in mindset that determines what we value, then “tourism as usual” will grow in size and impact with diminishing to negative returns. That value shift will only take place community by community. It requires re-learning and that learning can best be done in community.

Our aim with Conscious Travel is to accelerate that process of helping tourism hosts become the conscious change agents needed to envision and create a better, higher value form of tourism that enriches host communities, delights guests and provides a decent, sustainable yield to hosts. That’s what we need to grow but it will take a very different approach to that extolled in Abu Dhabi.  Work is proceeding now on seeking allies and partners to develop and test the collaborative learning platform.

Footnote:
There are now over 75 posts on this website – seemingly hidden from view! Here are some titles that relate to today’s discussion:

Why Tourism’s Impact is Hardly Noticed

Why Tourism Will and Must Change its Operating Model