How an Ashuar Shaman, whom I’ve never met, brought me to Ecuador

If I am enjoying the delights of Quito at the invitation of the Minister of Tourism for Ecuador (see earlier post) it is ultimately the result of the request made of some American colleagues by an Ashuar elder several years ago.

Having asked and received help from some Americans to fight the oil rigs encroaching their territory, the Ashuar, a tribe living in the upper reaches of the Amazon had no qualms about extending what we might think to be an impossible challenge to their guests and helpers – to return home and “change the dream of the north”. These so called primitive people, who had lived in harmony with their environment for thousands of years, knew that we, in the north had lost our way and our ability to see the reality the way it is. We need to change our dream – our way of seeing. The Americans – John Perkins, Bill and Lynne Twist co-founders of the Pachamama Alliance –  didn’t flinch and went on to develop The Symposium – a one day program that has now reached thousands of  people in 60 countries for which I was trained as a facilitator. (You can hear about the Ashuar request from Lynne Twist herself – here)

For as long as I can remember, I’ve been interested in the way we understand and describe so called reality. Back in 1990 I was deeply moved by Alan Ereira’s documentary about the Kogi,  a genuine lost civilization hidden on an isolated  mountain in the Sierra Nevada de Santa Marta, Colombia, nearly five miles high, on the Colombian-Caribbean coast. The Kogi emerged from their preferred isolation to say that without thought, nothing could exist. This is a problem, the Kogi said, because we are not just plundering the world, we are dumbing it down, destroying both the physical structure and the thought underpinning existence.They asked Alan Ereira to make a film so that we (the younger brother) would change and then they retreated to their world. Concerned that we didn’t listen and act, they have again come out of isolation some 20 + years later to repeat their message but with more stridency.

So here were two indigenous sources, completely independent of one another, saying what I knew in my heart to be true – unless we change our mindsets, worldviews, paradigms (the name isn’t important), we will continue to create a new problem while trying to solve an old one.

After spending 35 years helping – in my own very small way – tourism to grow based on the industrial model, I began to realize that a course change was needed. Conscious Travel is my contribution to changing the dream of the north by helping the tourism community respond to the Achuar challenge.

Given that context, it is highly fitting that it’s in Ecuador that I can share my initial thoughts about a version of tourism that could be built based on what is emerging as a new paradigm or mindset to replace so called scientific materialism.

Today I gave my first complete presentation on the why, what and how of Conscious Travel to members of the Ministry of Tourism in Ecuador and tomorrow I am privileged and honoured to participate on a panel in the Second International Congress on Ethics and Tourism of the UNWTO called “Conscious Tourism For a new Era” where a fellow British Columbian, Mathis Waeckernagel, President of the Global Footprint Network is keynote speaker.

Encouraged by the enthusiasm and passion of my Ecuadorian colleagues today – they seem to know how to “Ama La Vida” – I have posted up the slide deck and accompanying paper on slideshare, and linked below.

But for those of you with little time on your hands, here’s a sneak preview. As a starting point, I’m suggesting that we replace the 5 traditional Ps that we were taught as a way of implementing the industrial model (shareholder Profit from Product, Position, Price, Place and Promotion) to 7 new, richer, more relevant and meaningful P’s that have the potential to deliver more long-term, sustainable prosperity for many (Plenty derived from People, Place, Purpose that in turn ignites Passion, Protection, Pull, and Pace). 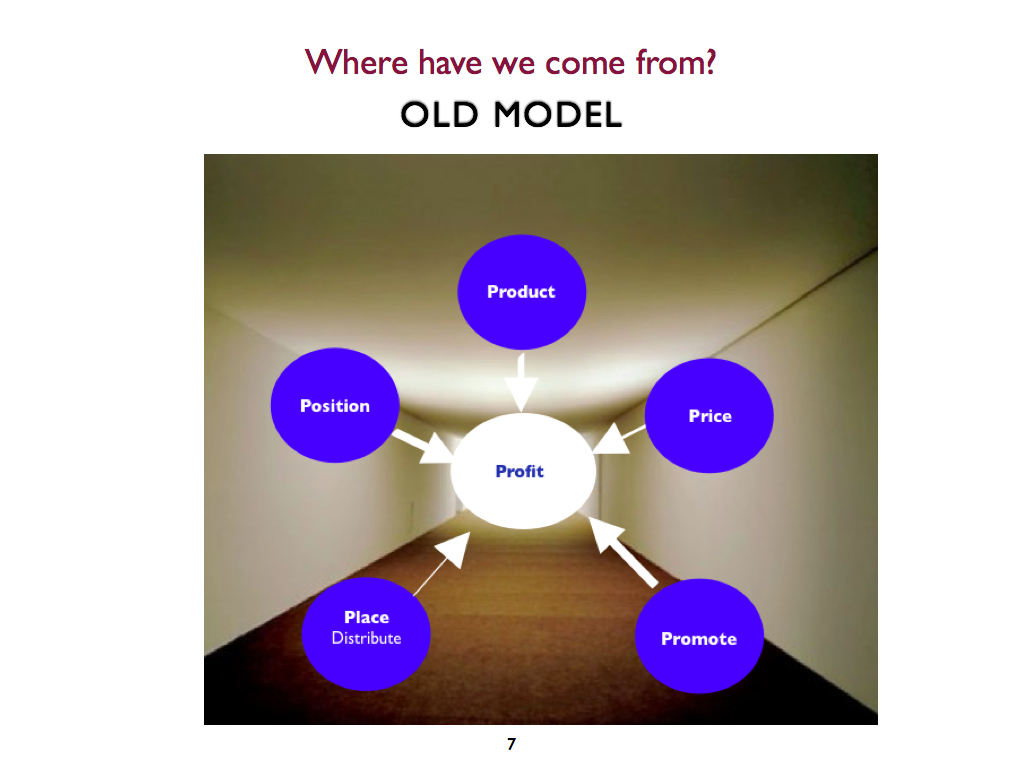 Executing this alternative approach requires relinquishing many of the values and beliefs that underpin the industrial model and which are now being shown by science and experience to be unreliable, inaccurate just plain wrong. To see my explanation in the slide deck skip to slides 39 – 46 or in the paper, pages 6-11.

Slides Used in Presentation to Ministry of Ecuador