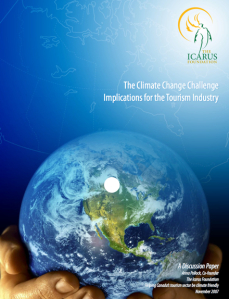 Seven years ago, several experts in sustainable tourism in Canada and I founded The Icarus Foundation and  published a report called the Climate Change Challenge; Implications for the Tourism Industry  urging destinations to develop a climate change strategy. It’s available from slideshare here.

Earlier this year,  another report, with virtually the same title  was prepared by a far more august institution – The University of Cambridge Institute for Sustainability Leadership report, Climate Change: Implications for Tourism, synthesizes the most pertinent findings of the Fifth Assessment Report from the Intergovernmental Panel on Climate Change (referred to as AR5) and is the most succinct, to-the-point summary of the subject available today.

On page 14, the Cambridge authors observed

“No country has yet developed a low-carbon tourism strategy, leaving the sector to find its own way to address climate change in the face of considerable uncertainties” and “The transition to low-carbon strategies by tourism will need to be initiated by the sector itself.” 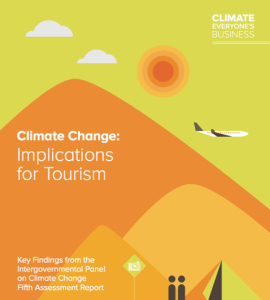 In the seven years that separated the two reports a significant event occurred – the global financial system almost collapsed and the tourism industry felt the pangs of contraction that absorbed its attention to the exclusion of all other factors. Even though the global economy is characterised by boom and bust cycles and even though that same economy was clearly experiencing a boom throughout the 90s, no one dared forecast a bust and many seemed surprised when it happened-  some actually believing that a new economic era had begun that defied normal economic gravity.

2013 marked the year when the tourism industry breathed a sigh of relief – tourism forecasts were almost back to normal with the UNWTO forecasting a 4.0-4.5% growth globally for 2014 and PATA forecasting visitor arrivals to the overall Asia Pacific region growing at an average rate of just over 6% per annum over the period 2013-2018.

Now please look at the destination strategies available in your region, and, if possible, name me one that does not start with or focus on a growth target – that’s a genuine request, by the way.

But how likely or desirable are such growth rates especially when you consider the base not to mention the converging change drivers buffeting the global economy from every angle and from within as well as without?  In 2012, international traffic passed the 1 billion mark in terms of trips across borders and domestic overnight travel was considered to outstrip that by a factor of 6-8.

My work on Conscious Travel was partially stimulated by the lack of consideration paid by the tourism industry to this critical issue – I felt we had to paint a picture of a better alternative to industrial tourism to encourage both reflection and action. Even though I disagreed with Milton Friedman on so many issues, I did subconsciously agree on this observation he made:

“Only a crisis – actual or perceived – produces real change. When that crisis occurs, the actions that are taken depend on the ideas that are lying around. That I believe, is our basic function: to develop alternatives to existing policies, to keep them alive and available, until the politically impossible becomes the politically inevitable[i]”

The single biggest challenge tourism will face over the next decade could well be the withdrawal of a licence to operate as normal. We can expect attention to switch from % increase or decreases in carbon emissions to a focus on absolute carbon budgets. Despite its best efforts at “greening,” tourism’s growth will result in a tripling of emissions from transport and accommodation – a growth that cannot be ignored or talked away. Here are the key points made in the Cambridge summary – all of which suggest that “business as usual” a.k.a. “growth as usual” is highly unlikely – suggesting that a strategy of better, not more,  might be worth looking at more closely. I fully understand that there are many parts of the planet where tourism does need to grow demand if its host operators and communities are to enjoy a decent living but that in many others the question – when is enough enough? might apply. In this post I am, as are the Cambridge authors, looking at tourism as a whole.

These bullet points, extract from the Cambridge report,  will take you a few minutes to read but hopefully will engage you in hours of reflection and months of action if they are to have any meaning or purpose at all.

Other related posts from Conscious Travel

The Burning Issue of Carbon June 2013

A licence to grow or get bigger – which do you choose?

Skift report just published: Cheaper Airfares Are Great For Flyers, Terrible for the Environment
“A recent study found that when US budget carriers such as JetBlue, Spirit, Fronteir, Alaska and Southwest launch new routes, they drive down prices, charged by all carriers as much as as 67%”