Changing Tourism from the inside out – cause for optimism in 2017

Two important, but unheralded, events took place in 2016 that give me cause for optimism as we start a new year.

First, the World Travel and Tourism Council (WTTC) – the self-proclaimed Authority for Tourism – released an article and video acknowledging that tourism needed a rethink. The significance stems not from the originality of this thought but its source. Up until 2016, the WTTC had shown no inclination to own up to its shadow let alone suggest that measures need to be taken to deal with it. From a body representing the largest and most powerful corporations invested in tourism, this sea change opens up huge opportunities for more realistic, creative conversations in the future. As stated here Comparing Apollo 13 to Mass Tourism, I applaud the WTTC for this step and trust it will follow through by gathering together a variety of views from within and without tourism to co-create a better future.

I am under no illusion as to how long it can take for an economic ship the size of Royal Caribbean’s Harmony of the Seas to change course. I have on my desk a now faded copy of one of my first purchases as a university undergraduate some 44 years ago (ugh! That makes me feel ancient!). In 1973, Sir George Young’s “Tourism: Blessing or Blight?” was promoted on its back cover with this statement:

Methodically, tourism is killing the thing it loves. This book clearly lays before us the symptoms of holiday mania and puts forward some radical and controversial solutions.

One of the solutions Sir Young proposed related to a “new role for tourism authorities.”

Instead of being promotional bodies aimed at securing a maximum tourist flow, they are more likely to become tourist development corporations over the next two decades acting within the context of a national plan which identifies the role of tourism and which blends the requirement of the tourist with that of the resident. Sir Young, 1973

Sound familiar? It certainly will if you have been following the DMO discussions led by firms/associations like DestinationThink!,  Toposophy,  The Travel Foundation and the DMAI. On the other hand, residents of places like Venice, Barcelona, Berlin, Bali, Palau, and living on islands in Thailand etc. could justifiably criticize Sir Young for indulging in nothing more than wishful thinking since consideration for residents’ needs has, until very recently, been put well down the list of priorities. In fact, one might speculate that public disillusionment with tourism as a clean economic engine,  that was expressed more vociferously than ever in the general press in 2016,  stimulated WTTC’s change of heart.

Before we leave Sir Young in the dusty pages of history, let me share the final two paragraphs from his book:

To conclude, the future of tourism represents a serious challenge to man’s ability to organise himself; to succeed, present attitudes towards tourism and current methods for planning it must change; and they must change in a way which neither the tourist nor the tourist industry may appreciate.

Those who instigate these changes, for the long-term benefit of society – including the tourist – will stand accused of curbing man’s freedom to travel and of restricting liberty of the individual and private enterprise. Such a criticism is shortsighted as it ignores the damage that unrestrained tourist development can cause and assumes that no price for freedom of movement can be too high. It is this view, above all else, that must be changed. Sir Young 1973

This conclusion provides the perfect segue to the second source of my optimism. The other organization most frequently proposing travel to be a human right, and for the industry to grow with few if any impediments is the UNWTO. As recently as 2015, the UNWTO made the following statement.

The core of our mandate as a UN-specialised agency is to promote sustainable tourism, but you can’t promote sustainability if you don’t promote tourism….. We stand for the belief that the growth of the industry on one hand and the preservation, protection, responsibility and sustainability on the other hand are not a zero-sum game. We can continue to grow, we have to embrace growth and never be afraid of it. (UNWTO 2015)

Later, towards the end of 2016, the UNWTO, published a report titled Global Report on the transformative power of tourism – a paradigm shift towards a more responsible traveller. There, the suggestion is made that it will be a growing market of more mindful, conscious, transformative travellers who will become the force that transforms tourism. 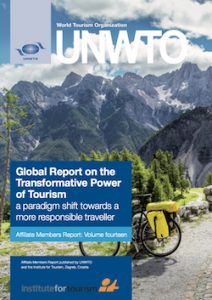 The authors of the first chapter, Irena Ateljevic, Pauline Sheldon and Renata Tomljenovic make a claim very similar to the one I have been making and sharing over the past six years i.e., that once consumer values shift, everything else will shift too. (For my take on the nature of that shift see my very first presentation on the subject tested out at a meeting of the South Pacific Tourism Organisation in 2011, my paper: Can Tourism Change Its Operating Mode? The Inevitability and Necessity and an early attempt at describing a conscious traveller).

While I am encouraged that the UNWTO is thinking about paradigms shifting, the implications are far deeper and more disruptive than a shift in market preference.  Many Millennials have shown a desire to “travel for social good” but that spawned a rise in many unethical voluntourism outfits. Concern for wildlife conservation is partly to account for the rapid growth in eco-tourism and a desire to travel further off the beaten track into “unspoiled” areas. When those market segments are allowed to expand without restraint, their potential for harm – no matter how unintended – can be greater that that caused by visitors confined to their walled-in, all inclusive resorts.

So after several years of observation and reflection, I don’t believe we can wait for guests to shape the nature of tourism. The initial responsibility lies with tourism practitioners – with hosts – to step out and create a better model in their own communities. The shift goes far deeper than a shift in fashion (i.e. a pattern of consumption) but involves a fundamental shift in the ways all humans see the world and their relationship to planet earth and the other life forms we share it with.  Hosts (suppliers) have a core responsibility to ensure their actions do, in fact, more good than harm. But living that responsibility will necessitate significantly more inner questioning, reflection and honesty than has been asked of us in the past. As I’ve stated elsewhere, philanthropic or sustainable practices bolted on to an industry dominated by a utilitarian, exploitive mindset that depends on volume growth, won’t be enough. They can be harmful if they lull us into a false sense of satisfaction that sustaining business as usual will be OK.

The good news is that this profound shift in the very logic on which human behaviour is based is definitely happening and, throughout 2017, I’ll try to show what that means for tourism. It’s our focus on root causes and delving into the assumptions and beliefs that underpin current practice that differentiates our approach from mainstream sustainability. For more see Our Approach.

The only way to change tourism is from the inside out

Frankly I’m not bothered what label we put in front of it – responsible, transformative, better, transmodern or conscious – what matters is that we understand where effective change starts. And that’s not in the doing, or policy, or legislation, or regulation or any other form of behavioural stick or carrot but on the inside of each human as she or he asks the questions that matter most – who they are, why they are here, how life works, and what their unique contribution might be while living on planet earth. That’s why changing tourism must start on the inside of each of us as we upgrade our view of reality more in keeping with what both our hearts and the findings of modern science tell us in 2017. The impact of that change will be felt most effectively at the community level as residents of places recognise their right to decide who to welcome and under what conditions.

Perhaps Sir Young was right after all – we must change in a way which neither the tourist nor the tourist industry may appreciate, starting by recognizing that, until we change from within, until we acknowledge our interconnectedness, and until we see that growth does not have to mean more but better, the price for un-restrained freedom of movement may be simply too high.

That is the seed of an idea I saw germinate in the tourism community in the first half of this decade and is cause for my optimism, let’s help it flourish into a mighty tree in the second!

Wishing all my readers a Happy and Flourishing New Year!