Can 1 billion tourists create one billion opportunities or 1 billion headaches?

As I am an optimist by necessity and an altruist by choice, I’ve no desire to criticize the sentiment behind UNWTO’s campaign  http://1billiontourists.unwto.org/. Hopefully it will also get the millions of hosts – many of whom are struggling right now – thinking more deeply about their future. 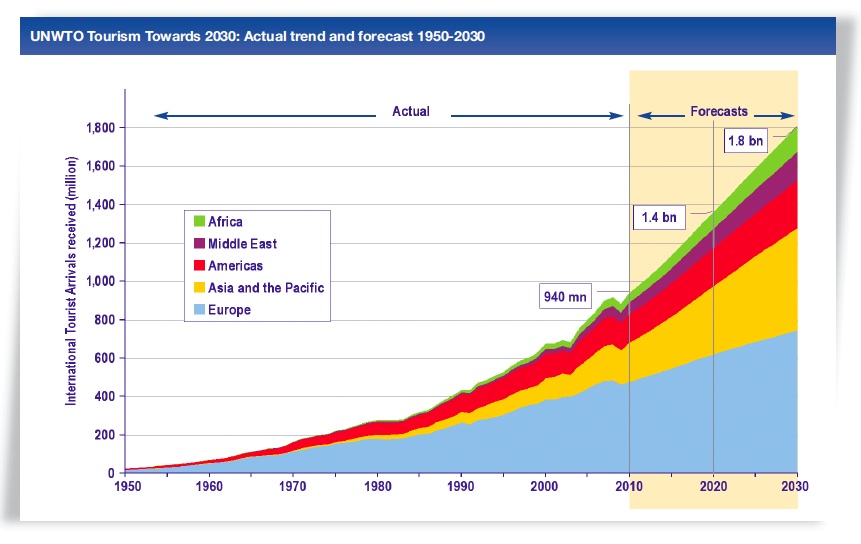 The campaign serves two objectives: first to remind the world just how big international tourism has become – transporting a billion people across international borders every year, and second to suggest that this literal mass movement could be a huge force for good. Implicit in the UNWTO’s visionary statement is the notion that if one billion tourists do so much good then more is better.

The altruist in me shares the view that one billion people on the move connecting with hosts from other cultures, sensing the world through a different perspective and experiencing their interdependence has the potential to be a “good thing.” But – and it’s a very big BUT – realizing that lofty vision will take an awful lot more than a trendy campaign and marketing spin. Unless there is a robust and well thought out vision as to how to convert one billion wanderers from being what some perceive as a plague of greedy locusts into positive agents for change, this campaign will attract either ridicule or slip quickly into obscurity.

Given that we live in an age of transparency in which citizens are better educated and informed than ever before, it behooves global bodies as well as corporations to be very careful about what they say and how they say it.  In the corporate world, reputation for integrity, authenticity and responsibility now accounts for much of a company’s market value. And this celebration might just be premature as I am believe that when the tinsel and pine cones are finally swept up in January we’ll be reminded just how fragile we are environmentally, financially and socially.

In today’s Age of Transparency, a most important first step towards building trust with any constituency is to be truthful (as in honest); the second is to be inclusive /interactive (i.e, involve other parties in your ecosystem) the third is to be practical (by complimenting the aspiration with practical steps for its realization) and the fourth is to be logical (ensure that the aspiration makes sense and is internally consistent).

Proponents of international tourism such as UNWTO and WTTC have had years of practice promoting tourism’s ability to generate investment, create jobs, enable money to be exchanged between rich and poor nations, and support the preservation of some precious spaces, places and artefacts. But it has been left to NGOs such as Tourism Concern in the UK; journalists such as the Guardian’s Leo Hickman, author of The Last Call and a growing number of bloggers and writers in the responsible, sustainable, fair trade movement to draw our attention to the costs and transgressions associated with this global juggernaut.

There can be no denying the evidence that mass tourism also produces vast amounts of waste (garbage and carbon); uses disproportionate amounts of scarce resources of water and land; displaces local and established populations; creates congestion and often does not leave much wealth behind for local populations to enjoy.

Until the UNWTO and its member governments start publicly acknowledging tourism’s dark underbelly, and take steps to account for the costs in order to measure “net benefit,” then campaigns such as these may generate skepticism at best and, worse, disdain.

Having said that, One Billion Tourists; One Billion Opportunities is a great vision so don’t let’s dismiss it out of hand. It’s crazily ambitious and noble but an aspiration worthy of serious, creative attention. If tourism realizes the UNWTO’s own growth forecasts, then there’ll be an additional 400 million more international tourists every year by 2020 (a mere 7 years away) and, given that we cannot expand a finite earth by 40% at any point in time, then the negative aspects of tourism – as it is currently practiced in many places – will soon become impossible to ignore and much harder to manage.

So here’s my take on the action necessary to attain this aspiration:

The opportunities that UNWTO describe will only be realized if there is a mammoth waking up to the realities of growing tourism on a finite planet. We need tourism leaders, policy makers, hosts and travellers who are conscious in the sense of being awake – capable of mindful, informed decisions; aware of the impact of their actions and alert both to the options open to them and the business environment in which they operate. This requires the same degree of ruthless self-honesty asked of addicts prior to commencing a recovery program. It also requires more humility and curiosity and engagement than many central bodies have been famous for in the past.

In short, the billion opportunities will only materialize if those same tourists know how to make conscious, informed choices and can be persuaded and enabled to select places and hosts who can prove that they care and are responsible.

That will require a lot more than wishful thinking  – nothing less than a huge social transformation – so I earnestly hope that UNWTO won’t treat this as just another smooth campaign but as a huge invitation to all its member governments, private sector partners and NGOs to come together to plan just how 1.6 billion tourists in 2020 will have become 1.6 billion opportunities for good. The alternative is a headache too big to contemplate and the challenge is simply too good to waste!

Note: as far as I can see, the UNWTO revised its forecasts down from 1.6 billion in 2020 to 1.4 billion and their forecast for the number of international arrivals in 2030 still stands at 1.8 billion.

Postscript
Ethan Gelber has written a quality post on this subject here: