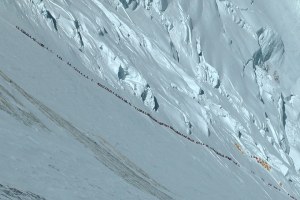 One of the themes of my writing on Conscious Travel is that mass industrial tourism contains the seeds of its own destruction. When travel becomes a right in the consumer’s mind and suppliers compete on the price of their products not the uniqueness of their places, then they must develop volume to make up for their diminishing margins. But this trend is creating a very big headache for future destination managers.

Even though 1 billion international trips were made in 2012, a very large number of people has yet to to travel. The number of attractive parts of the planet – often called tourism “hot spots” is, on the other hand,  finite. When the coming tsunami of tourism demand reaches the shores of limited tourism supply, the effects will be as illustrated in these 12 images published in the Guardian last month.

* a picture’s power to communicate is supposedly equivalent to a thousand words!

I wrote this post from the island of Upolu in Samoa where a small but proud nation of Polynesians – the greatest navigators of all time – celebrated achievement of their independence from colonial rule some 50 years ago. As the celebrations proved, their culture has survived so-called “progress” and modernity remarkably well:

Sadly tourism to these precious islands is currently under performing and, as a consequence, the island’s defences for the tourism tsunami are weak (for some more background on the challenges, please see a presentation given to the tourism industry in Apia last month here). But the hotels are all independently owned and Samoa’s international visitors can enjoy an authentic experience of a vibrant. living Polynesian culture whose roots stretch back some 3000 years.

If Samoa is to avoid Bali’s plight and become nothing but a playground for the spoiled middle classes of Australia, New Zealand and now Asia it will need the same vision, clarity, confidence and determination that created its proud nationhood. The best way for the tourism community to celebrate its independence is to commit to avoid being swamped by the greed and selfishness associated with unchecked tourism demand. Samoa has the potential to reap the benefits of becoming a “conscious travel destination” but not unless a critical mass of its hosts see the value in that and work together to create a better and more resilient future.

Samoa’s remoteness (relatively speaking) combined with its robust culture (85% of land is customary) have afforded the opportunity to develop tourism in a way that maximises benefit to its citizens. Samoa, like Bhutan, could lead by becoming a Conscious Travel Destination – in whatever way they choose to define and express that. Let’s hope the temptation to grab short-term cash won’t prove too strong and its leaders will exercise the vision of their forefathers.

For more see: Samoa Tourism At A Fork in the Road